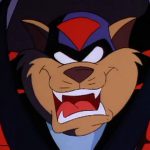 A Blaze of Love by Midnight

Chance and Felina spend some quality time together.

(Unfinished) The Pastmaster, in prison, is confronted by Razor with an interesting request–to help him return to the past and save Mayor Manx. The only twist for Pastie seems to be he’s all ready made the deal, and Razor’s trying his paw at arcane to get him into it.

A Chance to Live

A serious missile strike lands both SWAT Kats in MegaKat Memorial, on different floors. But, it’s more than distance that is keeping the two vigilantes apart. (Work In-Progress)

A look at the horrifying night that changed one future SWAT Kat’s life forever.

What was wrong with the Future Feral in the episode ‘A Bright and Shiny Future? How might T-Bone’s discovery in the future change his own present?

In Chance’s dreams, Callie dies. When the moment comes, will he save her, or will the dream come true?

A World Beyond Dreams

It’s Chance’s birthday or is it? Chance’s hidden past is about to make a shocking appearance, and it won’t be anything Megakat City will have ever seen before. (30 Chapters – Complete)

“Someone should invent a better fire alarm.” (Oneshot – Complete)

And So Chance Met Him

In a world where alchemy and technology work hand-in-hand, Chance Furlong saves a kat from a mugger. Too bad life wasn’t like the movies, or he would’ve realized this was the moment that his life changed forever. (Oneshot – Complete. Part of the “More Things in Heaven and Earth” series.)