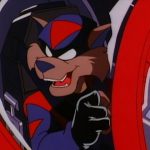 A pair of she-kats end up in a mobster’s crosshairs. As their secrets unfold, can Feral and the SWAT Kats protect them?

A new villianness has arrived at the city. She goes by the name Vampeera. This is Felicia’s first Enforcer bust. But, what exactly is Vampeera after?

Sequel to “The Kat Who Cried Wolf”. Terom and his gang of evil wolves are back, but this time they take care of that helpful white wolf before hand, and there’s no one to come to Jake and Chance’s rescue when they are attacked in the yard. But, Felina isn’t far behind on the wolves’ trail.

For an unknown reason, the city began to fall into attacks of various emotions. The deepest despair, the beastly anger, the absolute joy. How to fight an enemy that is impossible to be seen? (Complete – Oneshot)

Viper has succeeded in taking over the city and many of its people. Razor must work with an altered Feral to save Megakat City and his partner. (Work In-Progress)

(Unfinished) An unfortunate crossfire with Dark Kat and Commander Feral resulted in the termination of Jake Clawson and Chance Furlong from the force. But, what no one really expected was for a new pilot to come into the two Kats’ lives. Who would it be?

Jake and Chance have a Christmas party, and Jake gets a seemingly-uncurable illness.

Crime in Megakat City has gone down. A normal day passes and, at sunset, the whole planet is turned upside down. A horrifying broadcast sends the Earth into total chaos.

Abi learns more about her vilthurility as the visions grow worse, and Jake has a decision to make about taking care of her.

Of Brains and Buffoons

A tale of a big bloodsucking monster.