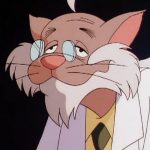 Professor Isaac Hackle’s private journal, detailing parts of the three years they spent in the swamps fighting the MetalliKats. Directly ties into the events of “Finality and Creeplings” and “Robots, Etc.”

When kidnapped by a disgruntled scientist bent on using his technological brains to his own advantage, Jake is reunited under tense conditions with his long-lost father.