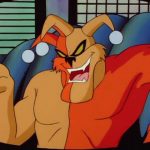 A Testimonial from Lenny Ringtail

Lenny Ringtail reflects on his various careers. His stint as Mad Kat may be what MegaKat City best remembers, but that’s not all there is to this multi-talented comedian. (Oneshot – Complete)

Have Yourself A Mad Little Christmas

It’s Christmas Eve, and Chance and Jake have been invited to spend it with the Clawson family. But, all is not calm. All is not bright. For one mad jester seeks his vengeance tonight.

Mad Kat Land: The Most Dangerous Place on Earth

Set 4 months after “Going Batty.” An amusement park that’s not so amusing. Mayor Manx, Deputy Mayor Briggs, and the children of MegaKat City are missing inside the unnamed park. The Swat Kats and three of their children investigate, only to be separated into three groups. T-Bone, Razor, Quiver, and Venus on a moving floor and the kitts to various dangerous rides set up by Mad Kat. Based on the level in the Swat Kats SNES game.

When a young Enforcer studying ways to counteract magical attacks manages to destroy half of Enforcer HQ, he finds himself sentenced to the salvage yard to work off his debts. Even as Chance and Jake debate how to keep their secret from the newcomer, further problems arise when Mad Kat’s kat-in-the-box is stolen. (6 Chapters – Complete)

A weirdo. A lunatic. A freak. Many things can be called to the insane jester’s receptacle. But, is the acceptor really a mad kat? Times change and recipients do so also…

The SWAT Kats team up with Scooby-Doo and the gang over a mystery involving an all-too common problem: counterfeit money. (Complete – 8 Chapters)