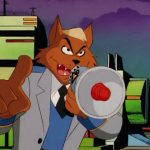 The SWAT Kats and five Enforcers — Feral, Felina, Steele, and two rookies — get knocked back into the dinosaur age by the Pastmaster. Luckily for her, one of the rookies has a thing for Razor.

Lt. Steele’s so annoyed with the SWAT Kats, how far will he go to discover their identities? Further than Feral!

The End of the SWAT Kats?!

New Chapter! While the SWAT Kats are out battling Hard Drive, Burke and Murray make an interesting discovery… (Chapters have been edited and re-organized. Work In-Progress)

In the aftermath of the horrors of Megakat’s drunken brawls, Feral and the SWAT Kats have to deal with a bomber and Steele’s annoying father.