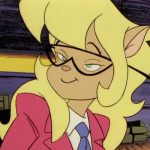 Callie finally musters enough courage to ask her favorite mechanic out on a date, but things get ugly when Dr. Viper decides to crash the party. (The remainder of this series has been removed per author’s request.)

Unmasked by the Loves of their Lives

A small story that deals with Jake and Chance getting involved with Callie and Felina and how they are ‘unmasked’ by the two She-Kats.

(Unfinished) Hunters are on the prowl on the planet MegaLuna. One hunts for sport, the other for survival, and they both hunt one species……the SWAT Kat kind!

(Unfinished) Callie is going on vacation. A new tomkat named Trevor Furson is looking for a new life in Megakat City. Harddrive has plans for Callie and the SWAT Kats. Is this a typical day for MegaKat City?

What Lives in Dreams

Callie dreams of her past…and of her Knight. But, she gets a wake up call in the form of Kandi. Lokii sees a surprising truth when she reads the Tarot cards. Are the SWAT Kats being used?

Commander Feral isn’t always taken by surprise, but Luna Morte has taken him by surprise, and he almost feels there could be something there…. Long as he keeps his wits about him. (1 Chapter – Work In-Progress)